Rally On the Runway for a cure

Recently I was invited to an amazing fashion show at Bloomingdale’s in Lenox Square called Rally On the Runway – Fashion Funds the Cure. But, this fabulous event was unlike any other I had ever attended before. This annual fashion runway show benefits the Rally Foundation for Childhood Cancer Research (Rally); a non-profit organization that empowers volunteers across the country to raise awareness and funds for childhood cancer research to find better treatments with fewer long-term side effects and, ultimately, cures for this devastating disease. Since its inception in 2005, Rally has given away more than $2.2 million to support childhood cancer research projects across the country. An interesting fact about childhood cancer that I was unaware of is that it is the number 1 disease killer of children ages 0-15, and that every day, two classrooms of students, about 46 children, are diagnosed with cancer. Staggering numbers indeed.

Commemorating its third year, Rally On the Runway was nothing short of fabulous. Dean Crowe, Rally Founder and CEO, hosted this spectacular event while Atlanta Falcons Linebacker Curtis Lofton, served as honorary chair. Sponsored by Robert Mondavi, Mercedes Benz, and Bloomingdale’s, Rally On the Runway hosts a silent and live auction featuring items such as various autographed Atlanta sports memorabilia, a Curtis Lofton autographed football, a Morkie Puppy that was utterly adorable, a Roger Waters concert experience, and a 4G LTE Samsung Galaxy Tablet just to name a few. Guests of the event also participated in a private shopping experience showcasing fabulous selections from Bloomingdale’s Spring collection while enjoying lite bites, cocktails, hors d’oeuvres and other delicious delicacies provided by local restaurants including Prime, Dantanna’s, Endive, The Tavern at Phipps, Gigi’s Cupcakes, Gallas Pizza, and The Wing Factory. Rally On the Runway also featured Atlanta Falcons players Ray Edwards, Coy Wire, Garrett Reynolds, and more, as well as professional models who graced the runway wearing the latest Spring fashions from Bloomingdale’s. But the true stars of the show were by far the fabulous Rally Kid models. Who are the Rally Kids you ask? Well, these adorable and courageous little divas are survivors in every sense of the word as all have been stricken with and battled childhood cancer. And although they were lead down the runway by their NFL player escorts, these amazing and heroic young ladies were definitely the starlets of the evening as they were all simply dazzling!!!

In addition to the runway event, the Rally Foundation holds a Day of Pampering event at Bloomingdale’s where Rally Kids and their moms have the red carpet literally rolled out for them as they arrived in fabulous Mercedes Benz chauffeured rides to enjoy a day of pampering and relaxation in preparation for the upcoming Rally On the Runway gala the following day.

During the event I had the pleasure of speaking with Falcons players Coy Wire, Garrett Reynolds, and Curtis Lofton, who each expressed how very honored they were to be a part of this incredible event. I’d have to say that standing next to these guys put things in perspective for me. Not only because of the significance of the event, but also because it was like standing next to a giant as they were literally towering over me. 😀

Thanks to fabulous Theo Tyson of Trinity Productions for the gracious invite.  This was definitely a humbling experience for me as I left with a renewed sense of strength and empowerment having witnessed the amazing spirit of these courageous little girls. Rally On!!!

To learn more about the Rally Foundation and their childhood cancer research efforts visit www.rallyfoundation.org.

Check out more pics from Rally On the Runway: 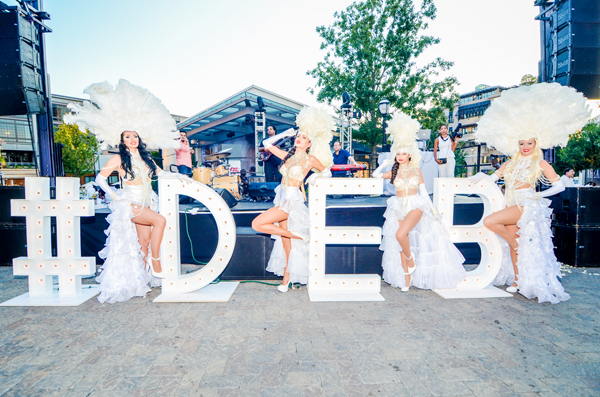